This year, several cities and regions across North America installed Eco-Counter’s real-time pedestrian and cyclist count display system, the Eco-DISPLAY. DISPLAYs are digital street infrastructure that show how many pedestrians and cyclists, or just cyclists, passed by a specific location. By displaying up-to-date data on participation in active transportation, the public can view how many people use a trail or facility and understand its value.

Displaying both pedestrian and cyclist counts is an increasingly popular feature. Walkable areas and recreational facilities are becoming a top priority in selecting where to live. Millennials are interested in walkability, more so than any other generation, as reported by a National Association of Realtors poll. Measuring and displaying both cyclist and pedestrian counts highlights that a trail or facility is multi-use. Here are some of the Eco-DISPLAY Classics installed in 2016:

Many people love to take a jog on the beach. Now, there are the numbers to prove it in Long Beach, California. Counters register numbers of cyclists and pedestrians who use the 3.1-mile twin beach paths near the Belmont Pier. Counts are displayed on an Eco-Totem as part of recent “livability” initiatives made by the City of Long Beach. View the counts live on their public webpage. 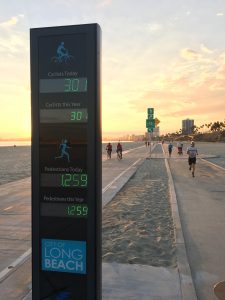 Capital Cascades Crossing pedestrian and cyclist bridge opened in September 2016. The bridge, outfitted with canopies and LED lights, is a key trail system link. Nearly three weeks after it opened, an Eco-DISPLAY Classic displayed that approximately 12,000 pedestrians and 3,000 cyclists had crossed the bridge.

Westchester Lagoon in Anchorage, Alaska is full of activity year-round, from cyclists to cross-country skiers. The Anchorage Department of Parks and Recreation installed counters where two popular trails converge. The DISPLAY project was led by Bike Anchorage. Data showing trail usage by cyclists is particularly important to supporting trail improvement initiatives. On the first day of operation, 379 cyclists were displayed.

Arapahoe Park and Recreation District recently installed an Eco-DISPLAY Classic to display the usage of Piney Creek Trail by both pedestrians and cyclists. Piney Creek is a route taken by residents of the surrounding suburban areas to reach Cherry Creek State Park. This TOTEM displays the value of the trail network for both cyclists and pedestrians.

Case Study: Optimizing Trail Widths in Sioux Falls, South Dakota
Counting Projects
Sizing trail widths to maximize safety and minimize conflicts is a process that benefits from accurate data. The number of trail users and the mix (...)
Real-Time Bike Displays: Why It’s Worth It
Not classified
Four years ago, we celebrated the very first Eco-TOTEM installed in Varberg, Sweden. Since then, Eco Counter has worked with cities all over the (...)
From temporary to permanent – count data and Montreal’s Avenue…
Counting Projects
Avenue Park Stanley is a newly developed, pedestrianized public space, connecting multiple popular parks in Montreal’s Ahuntsic-Cartierville (...)