The Eco-Counter International Awards ceremony is just around the corner! Before the official ceremony which will reward the best counting projects on June, 15 at Velo-City 2017, read about the nominees in the category “Communication“.

We selected three amazing projects which are creative and innovative. They all succeeded to shift perception on bicycle use and promote it with great ideas. Our jury is now going to select one of them to win the Communication Award.

For this category, nominees are:

Facing a slow decrease in its number of cyclists, the city of Auckand has launched a large project to support new cycling infrastructure in the city.

The Lightpath, which was opened to the public January 2016, is a brilliant example of a high-quality infrastructure used to attract the public.

The Lightpath is a 1km route incorporating Auckland’s abandoned Nelson St motorway off-ramp. More than an ordinary project, the Lightpath is an urban design masterpiece, painted bright pink and lit up beautifully at night via columns along the path. The lights have sensors so they can be programed to change color when someone rides by, creating a wave effect. Designed by Monk McKenzie and Landlab, the lightpath cycleway won the “Transport Award” at the World Architecture Festival. They worked with Maiori artists to include specific designs and a large koru pattern to ensure a distinct New Zealander identity.

In March 2016, Auckland Transport launched a communication campaign to celebrate the 100,000th cycle trip. The person making the 100,000th trip was rewarded with a golden-framed photo. The occasion was celebrated with specially themed ice cream sprinkled with hundreds and thousands, and more photo opportunities for fans.

>> More information on the Lightpath

The main goal of this campaign was to shift perception of bicycle use and promote it as safe alternative transportation. With the organization of events in the city and great social media activity, Hannover’s officials succeeded in encouraging cycling with a creative approach that focused on security and innovation. 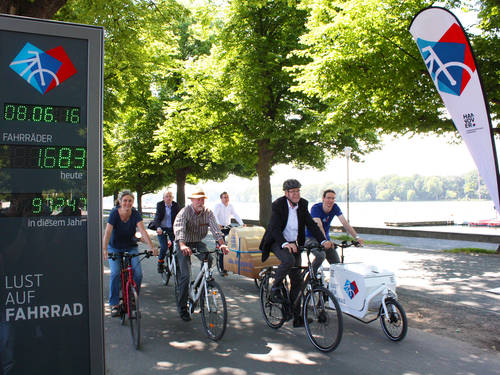 During the campaign, cycling was encouraged for leisure and commuting purposes, by highlighting the health benefits of daily use. Thanks to their recently-installed Eco-DISPLAY Classic and 13 counters all around the city, they were able to measure the evolution and impact of this campaign.

To convince Hannover residents, regular cyclists are encouraged to share reasons to cycle as well as their riding experiences. The city also launched a collaborative “call for ideas,” where people were asked to give their thoughts and ideas on how to improve bicycle use in Hannover.

>> Discover the official video for the “Lust auf Fahrrad” campaign

After being the first city in the US to purchase an Eco-Display Classic Multi (able to count cyclists and joggers at the same time), the city of Long Beach has launched a Mobility Challenge. The aim of this communication campaign is to encourage residents to get out and be counted by the newly installed device.

Using the hashtag #CountMeInLB, residents are encouraged to post photos and videos of themselves on Social Media as they walk, run or cycle past the Eco-DISPLAY, or as they take advantage of the city’s numerous trails, parks, beaches, streets and sidewalks.

This challenge is included in a larger communications project. One year ago, the city started actively promoting bike use with the launch of the Long Beach Bike Share Program. In May 2017, city officials launched Long Beach Bike Month during which events and giveaways were planned to encourage Long Beach residents to incorporate biking into their daily routines. The city engaged with users through an active presence on social media, sharing content and promoting challenges like #CountMeInLB. One particular communication campaign example gave citizens the opportunity to win prizes if they were able to find a specially made hot pink unicorn bicycle.