Context of the study

The Greater Lyon area is surround by a beautiful, diverse landscape, home to a wide variety of stunning scenery and beautiful flora and fauna. The landscape is part of the region’s heritage to be preserved as it contributes to the ecological, social and economic well-being of the Greater Lyon area.

In order to give the community safe and sustainable access to this landscape, the Metropolis of Lyon developed a network of natural trails and walking routes.

The latest studies on the use of the trails were conducted in 2006, mainly carried out by telephone surveys of residents.

It was therefore necessary for the Metropolis of Greater Lyon to update this study. In 2016/2017, the region decided to undertake a vast visitation study, focusing on the use of trails within the  Sensitive Natural Spaces (SNS) zone. The aim was to obtain reliable data in order to better manage and preserve the SNS and to communicate more effectively with the public.

The qualitative part of the study was carried out by Euroêka Marketing Conseil, a consultancy firm. In person surveys were conducted face-to-face on 12 remote trails and 2 established hiking trails by professional interviewers trained in survey techniques (dates of completion: May/June 2016 and September/October 2016). A telephone callback survey was carried out for 10% of all participants. In total, 1,001 questionnaires were conducted: 839 surveys on remote trails and 162 surveys on more established hiking trails. The surveys were mainly conducted on weekends but also during the week.

At the same time, Eco-Counter installed 12 counters over the study period of May 2016 to April 2017. Automatic data transmission was set up to give trail managers direct, daily access to the data in Eco-Visio without having to go up the rural trail to retrieve the data. A data alert service was also set up, which made it possible to intervene quickly in the event of anomalies (abnormal variations, zero data, etc.).

By combining the quantitative data from the 12 automatic counters installed on the trails with the qualitative data collected by professionals from 1,000 surveys, the community was able to obtain valuable information to manage and preserve its natural areas.

Results of the study

It is estimated that the total number of visitors to the nature trails in the Lyon metropolitan area during a year is close to one million, or an average of more than 18,000 visitors per week. Most users visit the trails very regularly, on average 73 visits / year (1.4 visits per week).

Visitor numbers are fairly well distributed throughout the year, but are highest in the spring. The same observation is made according to the days of the week, with greater use on weekends, especially Sundays. Weather is an important factor in determining attendance. During the course of a day, there are 2 main timeslots when attendance is higher: mornings and afternoons, with a dip during lunchtime. One of the trails, however, is very well used at lunchtime. The trail is located near an area with lots of economic activity, and so employees take advantage of their lunch break to come and run or to recharge their batteries. Overall, most users stay less than 2 hours on the trails.

94% of users live in the Lyon metropolitan area. The users are demographically diverse, however, there are slightly more users aged “50 to 64”, retired people and those in higher socio-professional categories. Families with children are slightly underrepresented on the trails at 15% of users. People most often use the trails alone (45%), or in groups of two (22%).

Follow-up for the study

This study provided the City of Lyon with a thorough and precise analysis of the use of trails. With 12 permanent counters and more than 1,000 responses to the survey, the data is robust and the results obtained now guide actions to preserve and enhance the sensitive natural areas of Greater Lyon, and help justify site development programs.

Improving signage across the network

Following the study, the City has changed signage around the network. The number of signs was reduced, but are now more regularly updated – reflecting the fact that visitors are coming to the trails more often than was previously thought.

In analyzing visitation, natural area managers also noted an under-representation of young people and families among trail users. In response, a treasure hunt was developed to attract these user groups. Treasure hunt kits can be purchased from Tourist Offices and other sale sites around the network, giving families a new, fun way to explore the trails. 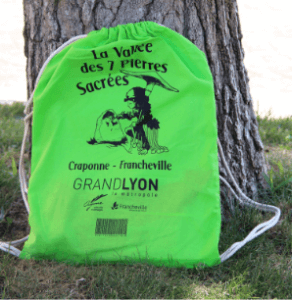 At the end of the study, the counters (initially installed as rental counters for the duration of the study) were kept by the community to enable them to maintain a long term trail count program. A large majority of the counters are used for temporary, mobile counting, to evaluate the impact of specific maintenance activities, and to understand the before and after impact of new trails.