It has been a big few years for cycling in Paris and we are proud to be part of that story.

Way back in 2008, right after the launch of the Velib bikeshare system, we installed the first bike counter in Paris. Fast forward a few years and the city released it’s 2015-2020 legislative agenda, featuring an ambitious plan for the development of cycling in order to reduce congestion, tackle climate change and increase safety for all road users. According to Mayor Anne Hidalgo, the vision is to transform Paris into a “global cycling capital”. By 2020, the City will have invested approximately €150m into cycling initiatives, including nearly 1,000km of new cycle lanes..

“We preferred quality to quantity. To make cyclists safer, we have set up real infrastructure dedicated to cycling. More than just markings on the ground, we have favored protected bike lanes.”
– Anne Hidalgo, Mayor of Paris.

The results of these bold efforts are starting to pay off.  The city has progressed to 8th place in the Copenhagenize Index, up nine places since Mayor Hidalgo took office in 2014. As Christophe Najdovski (Deputy Mayor of Paris and President of the European Cycling Federation) has noted publicly, bicycle use is increasing rapidly. On Georges Pompidou Street for example – a new bidirectional bike lane that follows the Seine River – bike counts increased by 67% between July 2018 and 2019. On Voltaire Boulevard – a unidirectional on-street facility that cuts east-west across Paris –  bike traffic more than doubled over the same period. 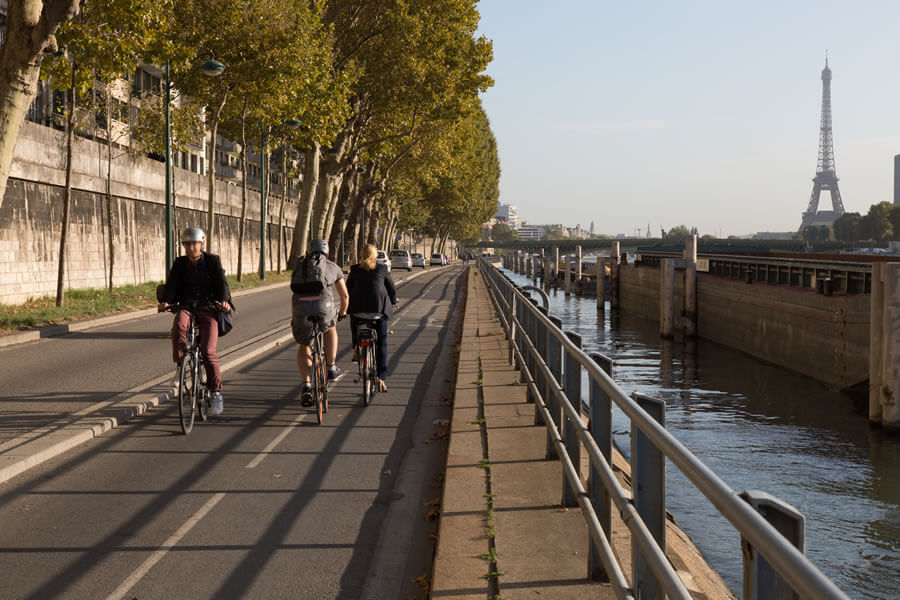 Paris’ most recent, flagship cycling infrastructure was unveiled earlier this year on Rivoli Street, an important east-west axis that crosses the heart of Paris, passing significant landmarks including City Hall and the Louvre Museum. Part of the City’s Réseau Express Vélo (Bike Express Network), this new bidirectional bike lane is 4m wide in places, with the capacity to accommodate significant daily traffic and comfortable riding for all-ages-all-abilities. 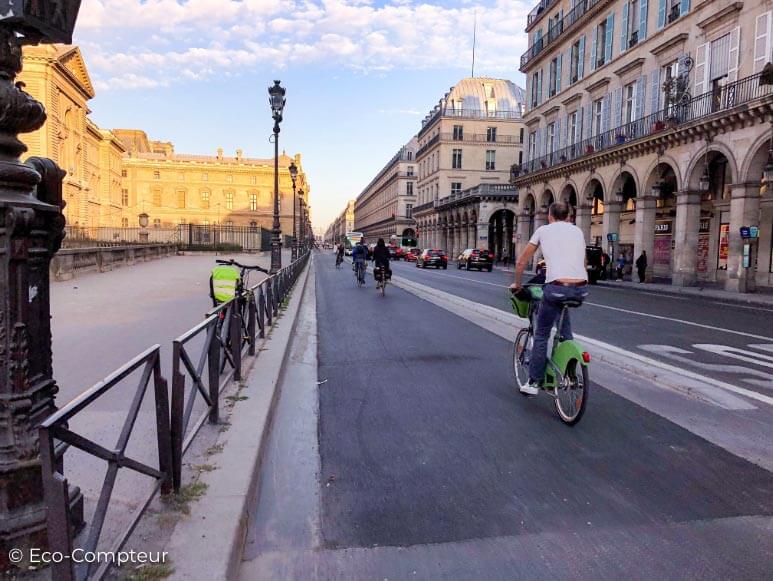 To demonstrate the administration’s commitment to active transportation, the new Rivoli Street bike lane features an Eco-DISPLAY Classic counter, right outside of City Hall in the heart of Paris. The counter, personally unveiled earlier this month by Mayor Hidalgo and Eco-Counter founder Christophe Milon, communicates the number of cyclists using the bike lane each year in addition to the number that have ridden so far that year. The counter was originally expected to hit 50,000 cyclists on the 1st of October – that number was reached by September 13th!

Today, the final stretch of the Rivoli Street bike lane was officially opened, giving Parisians a safe, separated bike lane option to travel 4km across the center of Paris from Place de la Concorde to Bastille.

Our most visible DISPLAY yet

While hundred cities have installed a DISPLAY counter around the world, this display, installed in front of Paris City Hall, is one of the most visible counters that we have ever seen. From a communications, pro-cycling, and commitment perspective, the symbolism of having the Mayor and Deputy Mayor attend the counter’s unveiling, as part of a bike tour around the city to inaugurate new cycling infrastructure, cannot be understated. It made us rather proud… 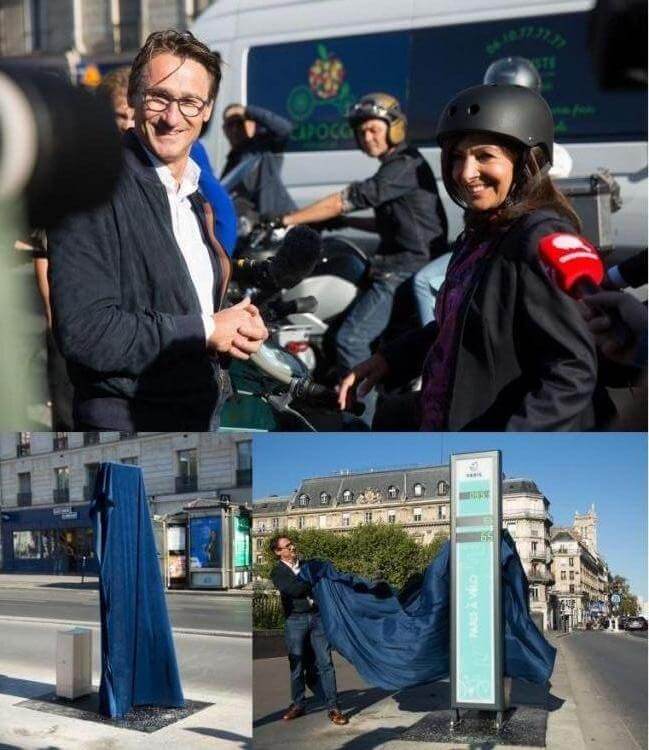 The response to the new DISPLAY counter has been great, including a wide-variety of media outlets, politicians and active transportation advocates. This reception truly underscores the need for greater protected infrastructure in the City, and for making cycling, and the number of cyclists, more visible to all road users.

Sidenote: the internet has surely assisted the counter’s popularity. Someone has already created a Twitter account for the display counter and  #compteurrivoli provides a constant stream of bike counter related content. 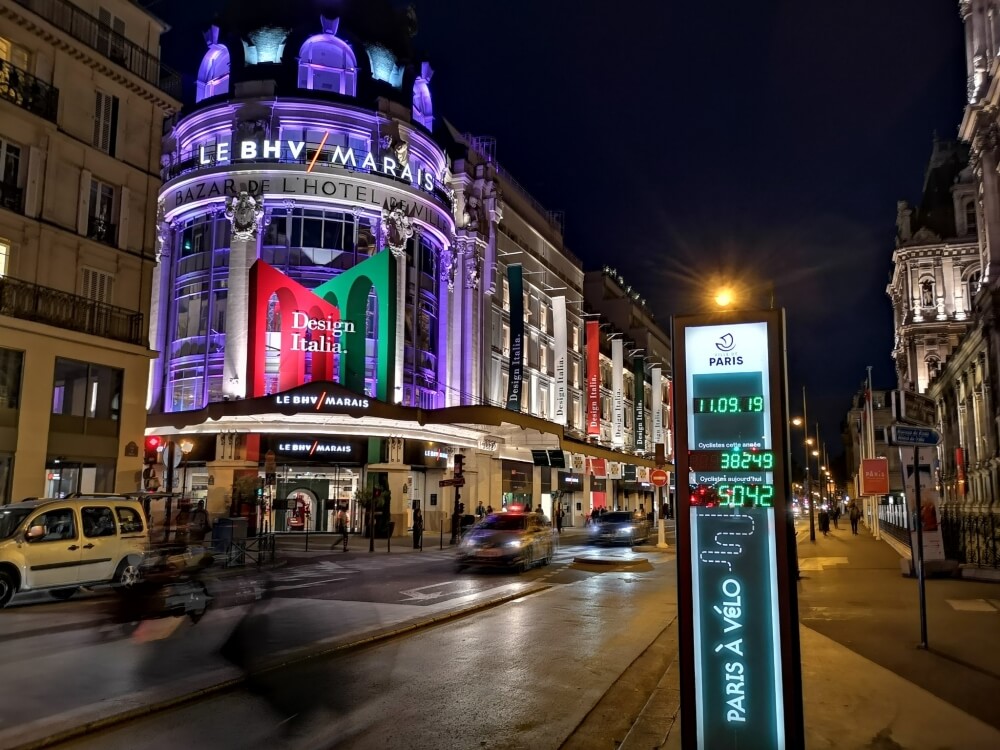 The new DISPLAY counter in Paris counts more than 5,000 cyclists per day 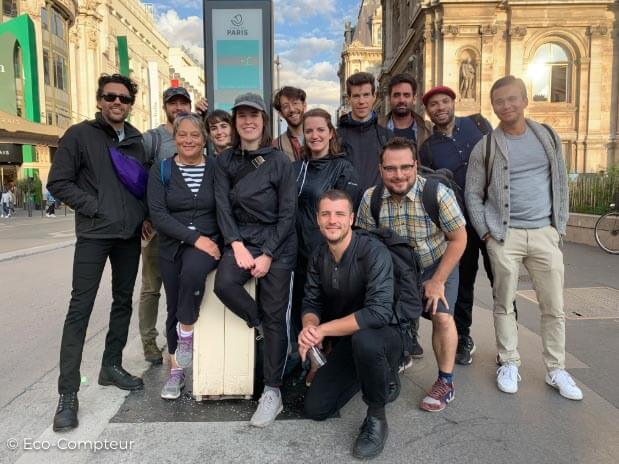 During a recent trip to France, the Eco-Counter Montreal team stopped by the new counter in the heart of Paris

We can only hope that this political commitment to cycling in Paris will inspire city leaders all over the world. The challenge now is for  cities to address the issue of mobility and cycling as a simple solution to the 21st century’s most complicated problems. We will continue to support the development of human-scale, inclusive cities by providing city planners and politicians the tools they need to plan, justify and communicate the success of new cycling infrastructure. 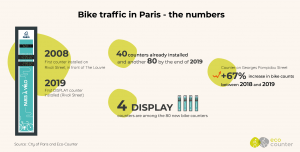 Assessing the impact of Car Free Day in Paris (...)
Case Study: Using Permanent and Temporary Counters in Quebec City (...)
How They Use It #1 – Kevin Stefan & the…
Counting Projects Planner Resources
Today, we are starting a new series here on the Eco-Counter blog. Over the next few months, a collection of posts titled ‘How They Use (...)