At this time, it is estimated that more than one billion people around the world are confined, or isolated, due the Coronavirus pandemic. The majority of countries around the world are progressively closing their public spaces and putting in place confinement rules to protect populations from the pandemic.

With such drastic limitations placed on peoples lives, what is the impact on bike and pedestrian count data around the world?

Analyzing data from all bike counters across France with public-data, we can see that since the start of mandatory confinement on the 17th of March 2020 at noon, bicycle counts have decreased sharply compared to average. Looking closely at the data, we also see a gradual decrease each day in counts following the confinement. On March 22nd, bike counts across France were down 82% vs. what would be expected. 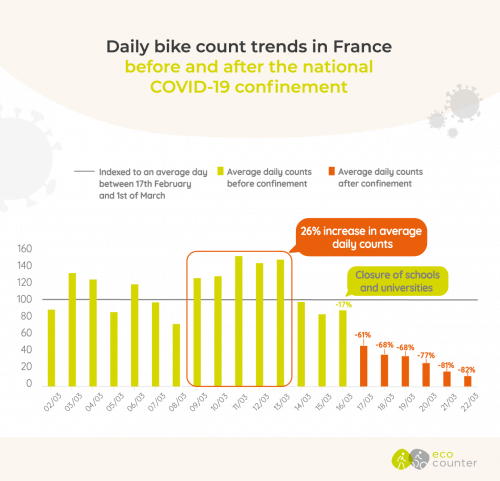 In Toulon, two recently installed Eco-DISPLAY Classic counters captured an important decrease in counts. By looking at the hourly profile of these two counters, we see that one route is used for commuting travel (with peaks in morning and evening traffic), while the second route is used for recreational cycling. In both cases, there has been a significant drop in bicycle traffic since the confinement rules went into effect, a sign that the efforts are reducing both utilitarian and recreational cycling. 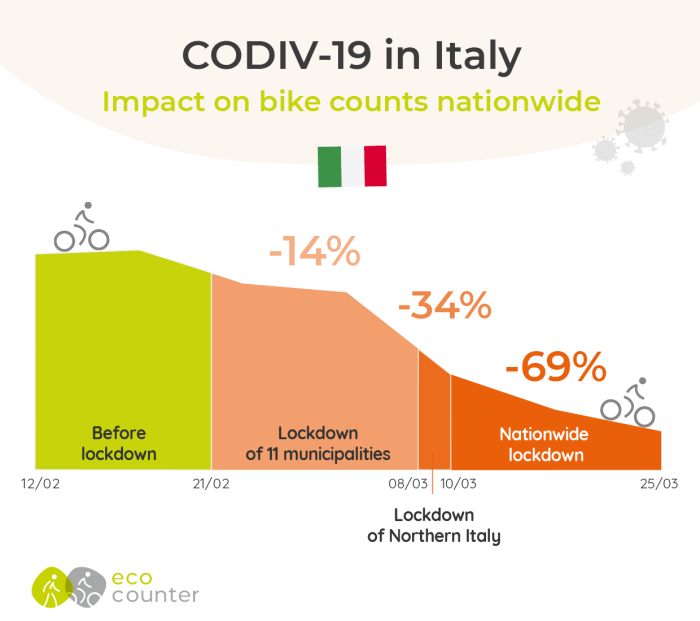 Every country has reacted to the Coronavirus pandemic differently. In Italy, the COVID-19 lockdowns were put into place earlier than in France, and the impact only daily bicycle counts has followed a similar trajectory. One notable difference, however, is that the partial and progressive lockdown of the country has led to different phases in the decrease in bike counts.

At first, on the 21st of February, 11 municipalities in the province of Lodi were placed on lockdown. After this initial lockdown, the average daily bike counts nationally decreased by 14% compared to the reference period (the month previous to the outbreak).

Once the north of the country was put into lockdown on the 8th of March, we saw bike counts drop drastically – 34% compared to the baseline average.

Finally, once the whole of Italy was placed in lockdown on the 10th of March, average daily bike counts fell further and continue to decrease until today.

One other difference to France was that Italy did not see increase in bicycle traffic at first as users switched from public transit to cycling, as was observed in France. Instead, a gradual decline in cycling has been seen throughout the pandemic so far. 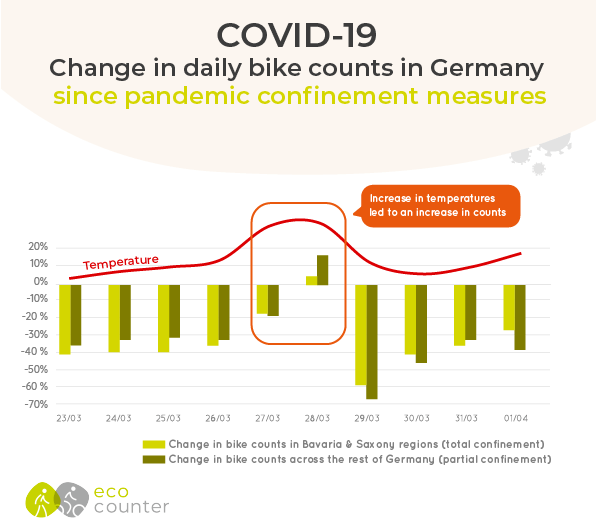 How has daily bike traffic evolved in Germany? With confinement measures being applied differently accross the country, we see different trends, as well as the effect of nice weather during the week-end.

Our bicycle and pedestrian counters provide an essential stream of data, an important tool for for managing and understanding crises such as COVID-19. In this case, understanding bicycle count trends can gauge the effectiveness of measures taken by governments to limit travel in order to halt the spread of the virus.

Did you know?
Eco-Counter’s online data analysis platform, Eco-Visio, allows you to generate automated PDF reports overviewing your count data – a useful tool to quickly share a broad synopsis of count data with partners and stakeholders.

Want to learn more about bike and pedestrian counts and what Eco-Counter can do for you? Get in touch.

2017 in numbers: Europe’s top 5 bicycle counters
Data Visualization
Happy New Year from the Eco-Counter team! We are excited for the year ahead and can’t wait to hear about your projects for the coming year. As (...)
Eco-Counter Worldwide Cycling Index 2018: the results!
Data Visualization
Over 400 million trips logged by 2,725 counters spread across 32 countries. This is the data proved and validated for the Eco-Counter 2018 Worldwide (...)
2016 Worldwide Cycling Index: the results!
Data Visualization
Because there was no better place to do it than Velo-City, the fantastic congress gathering bicycle experts from all over the world, we chose to (...)