List of articles
From pilot to permanent: the case of the Burrard Bridge ten years ago
Counting Projects • News • Not classified
Share this article

In this month’s blog post, we are going to step back in time to look at one of our favorite projects ever, the Burrard Bridge bike lane project in Vancouver, British Columbia.

Ten years later, what can the Burrard Bridge teach us about pilot projects, bike lanes, and data collection?

Vancouver’s Burrard Bridge connects the residential Kitsilano neighborhood with Vancouver’s downtown core across False Creek, a picturesque inlet of the Pacific Ocean. For many years, the bridge had 6 lanes of vehicle traffic with two adjacent sidewalks that were shared by a significant volume of cyclists and pedestrians. 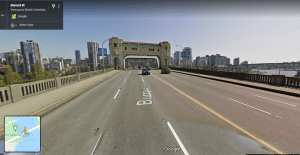 In 2009, a dedicated vehicle lane was removed from the bridge and a pilot project protected bicycle lane was temporarily built in order to accommodate the increasing number of cyclists crossing the bridge (between 1994 and 2004, bike trips to and within Vancouver increased 180% and walking trips increased 44%) and to reduce conflicts on the shared-use sidewalks with pedestrians. 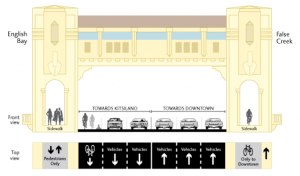 At the time, criticism from drivers, residents and politicians over the proposed bike lane was widespread. Critics predicted mass chaos on the bridge and in the downtown area on the other side. Media coverage focused on angry drivers who feared the worst. The protected bicycle path, however, provided commuter and recreational cyclists a much needed safe crossing between two key parts of the city.

There were four key elements involved during the trial: 1) the addition of protective barriers to separate bike lanes from traffic; 2) traffic signal modifications; 3) transit priority measures to minimize impacts on transit and; 4) a monitoring program to assess impacts and flow levels (traffic counting, signal monitoring and trip timing).

Counting from day one

Bike count data collection was an important part of the project from day one. In order to meet the needs of the project, the Eco-Counter R&D team got hard at work to create something new. A temporary, no cut installation counter was needed with the durability to withstand high bicycle volumes for the full duration of the the project. Our temporary TUBEs counter, for example, is recommended for 2-6 week count programs. Our ZELT inductive loop counter is for permanent counting, and involves installation on the infrastructure. The first version of the Easy-ZELT – our durable, precise, battery-powered bike counter designed for 3-12 month ‘semi-permanent’ projects – was born.

An Easy-ZELT was installed on the temporary bike lane from day one, and remained there throughout the one-year trial.

Following the pilot project, bike count data was analyzed in combination with traffic data. The data showed that closing a motorized lane to transform it into a bike path actually allowed more people to use the bridge than before.

According to the City of Vancouver, between July 2009 and July 2010, 24% more bicycle trips were made over the bridge than would have been made had the reconfiguration not happened, amounting to an additional 200,000 bike trips in one year. The growth was most dramatic during summer and fall weekends, where volume was up 40-70%.

City staff also studied the impact of the bike lane on vehicle congestion. Looking at GPS data from city buses, no difference was found between travel times before and after the introduction of the bike lane. 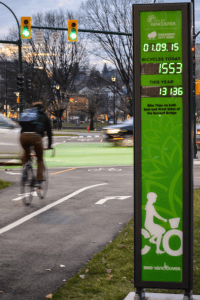 The temporary project was a success and the protected bike lane became permanent. The Easy-ZELT was replaced by a permanent ZELT counter that continues to collect bike count data today.

There is now a unidirectional bike lane on either side of the bridge, in addition to the pre-existing sidewalk space for pedestrians. In 2018, a total of more than 1.3 million bicycles were counted on the bridge – more than 3,500 each day on average. An Eco-DISPLAY Classic counter proudly displays the number of bikes that have passed so far that day, and that year to date. As of June 2020, the Burrard Bridge had already counted more than half a million cyclists so far this year!

In 2020, just over 10 years later, the bridge’s bike lane development is now presented by City of Vancouver officials and its urban planners as a turning point in the City’s pro-cycling policy, as well as a model for the realization of the city’s secure cycling network.

Today, the Burrard Bridge has a unidirectional bike lane on either side of the bridge. Source: Google Maps

Want to discover more about bike and pedestrian counting on temporary and popup active transportation infrastructure? Check out our recent blog post on the topic.

Interested in learning more about what Eco-Counter can do for you? Get in touch