This blog was was originally published by the Winter Cycling Federation, ahead of the 9th Annual Winter Cycling Congress which takes places (virtually) on Thursday 10th and Friday 11th February, 2021. Keep an eye out for two different Eco-Counter presentations during the conference – one by Enrico on Thursday, and one by Matt on Friday.

Two years ago, on a frigid night at the 7th Annual Winter Cycling Congress in Calgary, Eco-Counter’s Matt presented a Pecha Kucha titled ‘Data in the break room – Engaging city workers with winter cycling’. The presentation told the story of a poster, a poster that both captured the growth of winter cycling in the years prior and to sought to engage City of Montreal snow clearing staff with winter cycling.

Among other data points, the poster – the results of a long-term cycling study by Eco-Counter – highlighted the fact that year-round cycling in Montreal grew by 40% between 2009 and 2018. The growth of winter cycling was particularly remarkable. The winter cycling retention rate – the share of cyclists who continue to ride in the winter – was up at 13%, compared to 6% in 2009. Bike counts during the deepest winter months of January and February increased by 159% between 2015 and 2017. 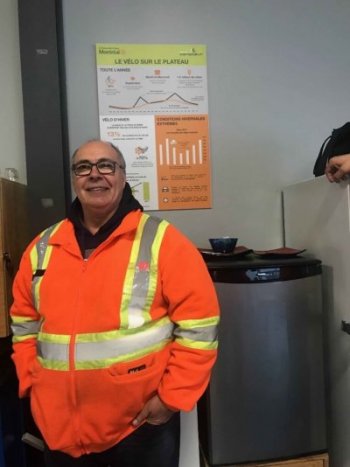 A City of Montreal snow clearing staff with the winter cycling poster.

The poster was hung in the break room of City snow clearing staff in order to highlight the growth of winter cycling and demonstrate to staff the importance of maintaining bike lanes during the winter. The feedback on the poster was great, with snow clearing staff expressing that it gave meaning to their work, and one plow driver even starting to bike to work each day! 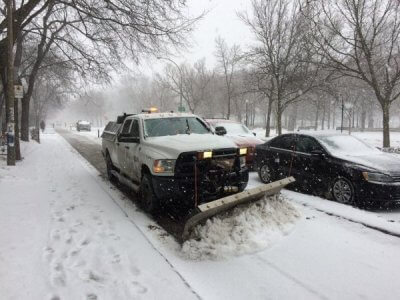 The bidirectional bike lane on Montreal’s Rachel street is plowed after an early season snowfall.

A few years later, a lot has changed in Montreal. On cold, snowy mornings, you are no longer the only cyclist at a red light, and the infrastructure maintenance is better than ever before. So, how much have things changed? The city’s automated bike counters provide objective data that capture the growth. 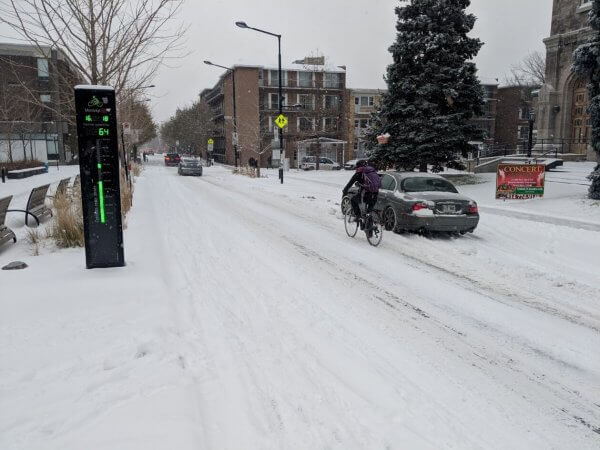 An Eco-DISPLAY Classic counter on Laurier street counts a cyclist on her snowy morning commute.

In November, Eco-Counter undertook a follow-up analysis to understand the recent growth of cycling in Montreal’s Plateau-Mont-Royal (Plateau) neighborhood – a large, central neighbourhood that is home to the city’s principal north-south and east-west commuting axes. Once again, a poster was created with the results. This time, however, the posters were given to city staff, urban planners and city councillors who are working hard to make Montreal a bike friendly city year-round. 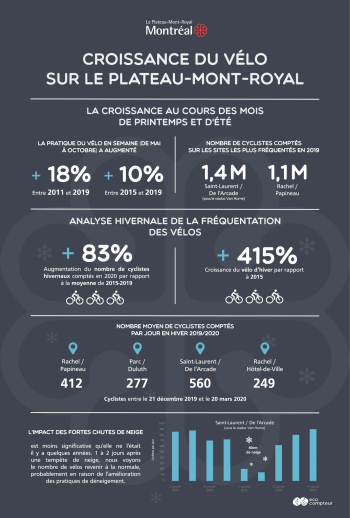 If you don’t speak French, the staggering growth of cycling might pass you by, so let’s dig into a few of the data points. First, looking at counts during the non-wintery months, there has been a tremendous, sustained growth in cycling.

That impressive growth is only outdone by the boom in winter cycling in Montreal’s Plateau-Mont-Royal neighbourhood.

So, a note to fellow Montreal winter cyclists: if you have been riding for a few years, your observations and anecdotes are correct! There are, in fact many, many more of you. 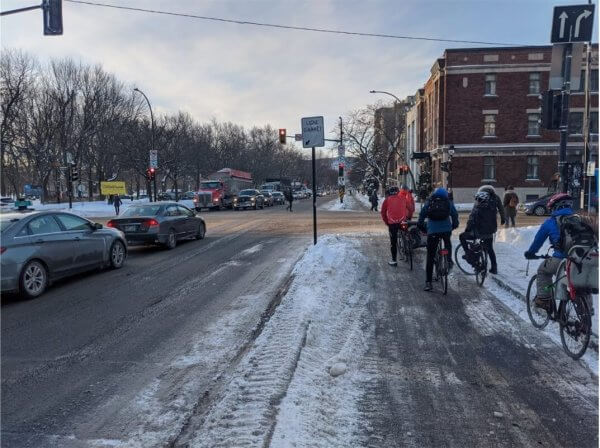 Cyclists line up at a red-light during rush hour in January 2020.

Daily bike count data is publicly available through Eco-Counter’s interactive Public Web Page, and historical bike count data is available for download through the City’s Données ouvertes (OpenData) portal. Using these open data platforms, we can see the consistent use of the City’s cycling infrastructure year-round. This year, for example, winter cyclists for the first time have access to the bike and pedestrian path on the Jacques-Cartier Bridge during the winter months. Previously, this essential North-South crossing point was only open during the warmer months. The path is plowed, maintained, and a Twitter account provides regular updates on the bridge’s condition in both English and French.

If we dig into the public bike count data for the newly-opened winter path on the bridge, we see that the winter infrastructure is consistently used, with an average of 237 bikes counted per day so far this year. Counts were dramatically reduced during a significant snowfall in the middle of January 2021, at which point the path was closed for snow clearing, but cyclists returned immediately the next day once it was cleared. 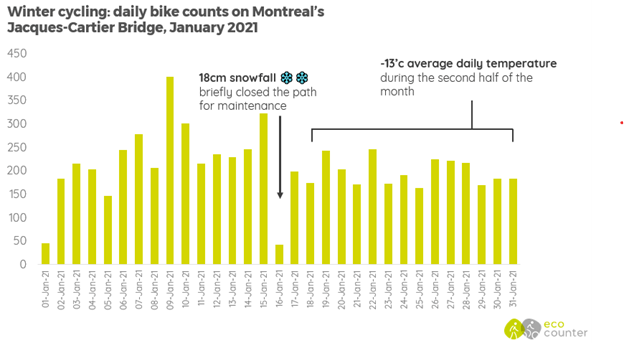 For the city’s bike shops, this increased rate of winter cycling has translated into a significant increase in business during the previously-slow winter months. We spoke with two bike shops in the neighborhood to understand what this has meant for business. The bike shops looked at sales data during winter months of items tagged ‘winter’ in their system – most notably the sale of winter tires, winter specific bike prep or tune-ups, and other accessories such as gloves and clothing. The shops owners also expressed that they were proud to be able to retain more staff during the winter months than before; this January, 40% more of their budget was allocated to payroll than it was in January 2021. 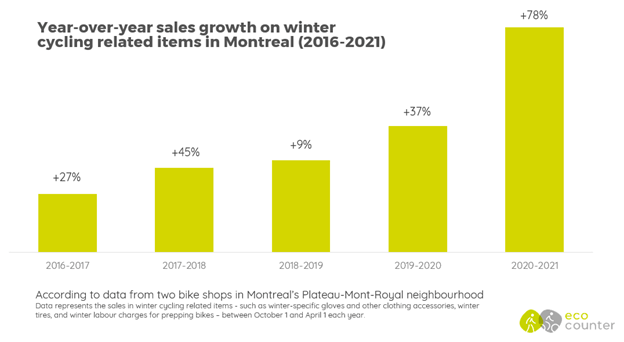 The next few years will be exciting for winter cycling in Montreal. As much has changed in the past few years, we can expect that growth to accelerate in the years ahead, fueled by the pandemic bike boom, newly unveiled cycling infrastructure projects in the city, and a political push for active transportation at the municipal and federal level.

No matter what is in store for cycling in Montreal, automated counters will be there to track the growth and serve as an essential tool to inform bike planning.

Winter Cycling Congress 2017 Highlights: Celebrating Successes and New Research The Winter Cycling Congress is an invaluable opportunity to discuss cycling during our favorite time of year- snow and all! Eco-Counter was excited (...)
Making cycling at night count
Counting Projects Data Visualization News
Note: This article was originally published by our partner NewCities – a global nonprofit committed to shaping a better urban future – (...)
Looking back on the 2020 cycling boom – digging into…
Data Visualization News
A lot has been made of the 2020 bike boom. From popup bike lanes, trail overcrowding, and a shortage of bikes (after all, ‘bikes are the new (...)