In order to give more space to pedestrians and cyclists during the COVID-19 pandemic, many cities have begun to deploy temporary and pop-up active transportation infrastructure.

Pop-up infrastructure – sometimes called ‘tactical urbanism’ – can take many forms, but often involves closing one vehicle lane of a road and allocating that space to cyclists or pedestrians. These projects are usually completed in a short period of time, relying on plastic posts, volunteers, paint, or other low-cost, easy to deploy solutions.

In the context of the COVID-19 pandemic, these temporary changes are essential for people to safely continue moving around the city for transportation or leisure. Pop-up sidewalks, for example, allow pedestrians to walk safely on busier commercial streets and maintain a social distance to those who may be lining up outside stores. 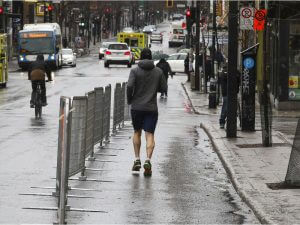 Montreal’s ‘Health Corridors’ were constructed quickly after the pandemic on busy shopping streets to give pedestrians more space || Source: The Montreal Gazette

COVID-19 is raising questions about how cities should be planned in the post-pandemic world. While some of the recent temporary infrastructure changes will be removed after – such as Oakland’s bold network of 74 miles of closed streets –  other measures are being used as pilot projects to test the waters for permanent, long term plans.

?‍♀️ London's road to recovery cannot be clogged with cars.

?‍♀️ From Hackney to Hounslow, Pimlico to Putney, great to see support from Londoners for #StreetspaceLDN. pic.twitter.com/HdBNjqa41N

Both Paris and London, for example, are using this moment to roll out new cycling infrastructure as part of their long-term visions of a more bicycle friendly city.

Measuring the impact of COVID-19 street closures in Denver

In early April, Denver closed four streets in order to give people more space for walking, cycling, and enjoying the outdoors during these difficult times. In total, 26.1 miles of roadway were made mixed-use in response to the pandemic. 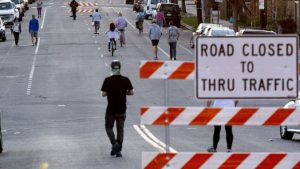 Denver’s 11th Avenue is closed to vehicles, but open to people || Source: Denverite

Part of the SPIN Mobility Data for Safer Streets initiative, Denver Streets Partnership used a Mobile-MULTI bike and pedestrian counter – a combination of our PYRO and TUBE counters – to capture bike counts on these “people first” streets. The closed streets were a hit.

On some days, bike counts were nearly triple what they were during the 2015 baseline period, illustrating just how much residents were benefiting from the changes. On one street, 16th Avenue in North Capitol Hill and City Park West, an average of 1026 people per day used the street between April 8th and April 19th. 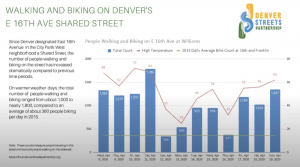 Denver Streets Partnership also drew on data from SPIN bikeshare rides and found similar trends. One closed street saw a 1394% increase in ridership since the implementation of the safe street corridors! With this vital data in hand, the advocates will make the case that some of the infrastructure remain a permanent feature of the city’s active transportation landscape.

In addition to the Mobile-MULTI, the Eco-Counter Easy-ZELT (seen below) is another great, quick-deploy tool for collecting data on temporary and pop-up infrastructure. The Easy-ZELT is a battery powered (2 year life), durable loop counter that was designed for 3-12 month count programs. The stickon, no cut loops are attached with road bitumen tape and can count (and detect direction of travel) on a wide-variety of cycling infrastructure, including bidirectional bike lanes, shared sidewalks, multi-use paths, and cycle tracks. 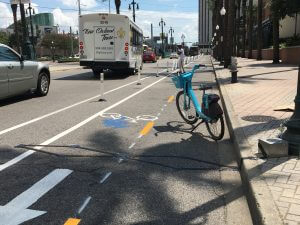 As a sidenote, the first ever Easy-ZELT was deployed in Vancouver more than ten years ago on the Burrard Bridge temporary separated bike lane project. The project was a success and count data was pivotal in making the case. But that’s a story for a future blog post!

Want to learn more about bike and pedestrian counting on temporary active transportation infrastructure? Our team is here to help, get in touch.

What dedicated cycling infrastructure can achieve San Francisco Municipal Agency’s investment in dedicated cycling infrastructure boosted active transportation.  A bike counter display (...)
Mapping Bike Traffic Data: Revealing Infrastructure Usage Patterns
Not classified
A common saying in the transportation world is “if you build it, they will come”. Measuring the impact of new bike infrastructure on cycling (...)
Commit and they will come – the case of cycling…
Counting Projects News Press review
It has been a big few years for cycling in Paris and we are proud to be part of that story. Way back in 2008, right after the launch of the Velib (...)