For the past few years, we have been proudly involved in the European Union ‘Atlantic on Bike‘ project – part of the extensive Eurovelo network of trails and greenways across the continent. Atlantic on Bike, which started in 2017 and is set to wrap up at the end of the year, is an impressive collaboration between 21 partners from Norway, Scotland, Ireland, England, France, Spain and Portugal.

The project set out to develop the European EuroVelo 1 (EV1) “Atlantic Coast Route” – ultimately providing a world-class, long distance bicycle tourism route. The EV1 – just one of the 17 EuroVelo routes managed by the European Cyclists’ Federation (ECF) – spans 11,000 kilometres (7,000 miles) from Norway, down the coast of Ireland, through France into Spain and Portugal. 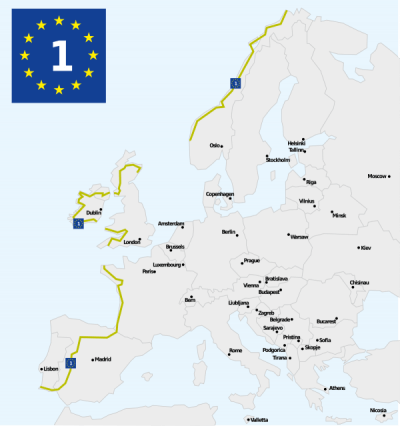 The transnational project to develop the new EuroVelo1 route brought together a few different key objectives, including:

The various project objectives were divided into working groups and carried out by different stakeholders. Working with our partners, we worked to develop a transnational evaluation platform for the route. This platform – based in our Eco-Visio online data analysis platform – brings together data from more than a hundred bicycle counters along the route, combining count data from Eco-Counter bike counters in addition to bicycle data from other providers.

With such extensive coverage, the platform allows users to assess network use – including daily, weekly and seasonal trends – at a wide-variety of locations along the route.

Count data serves as the foundation for assessing the economic impact of the EV1 Atlantic Coast Route, as the count data is combined with other forms of qualitative and quantitative data. In total, more than 6,000 field surveys were administered in the various countries over the entire route to assess how the network is used and evaluate the economic impact.

Initial key figures from the study show that the route generates an estimated €200 million in economic benefits across the seven countries. Annual bike traffic along the route is estimated to be 10.5 million cyclists, with an average expenditure of €72/day for cycle tourists and €3.9/day for daily users.

In the coming months, a detailed report on the route will be published, analyzing and cross-checking the quantitative and qualitative data to provide an accurate understanding of the itinerary, and assess the full economic impact along the route.

We’re proud to have been part of the ‘Atlantic on Bike’ project, and can’t wait to keep track of just how much the new EuroVelo 1 ‘Atlantic Coastal Route’ is used over the coming years.

Clôture d’Atlantic On Bike, projet européen cyclotouristique dont Eco-Compteur est…
Etudes de fréquentation Vie d'entreprise
Eco-Compteur est heureux et fier d’avoir participé au projet Atlantic On Bike, projet européen débuté en 2017 et qui s’achèvera au 31 (...)
Ridership Data in Calgary: Guiding Decision-Making The results are in! Cycling along the protected bike lane network in Calgary has tripled overall since its installation, according to the City of (...)
COVID-19: the evolution of bicycle and pedestrian activity following containment…
Data Visualization
At this time, it is estimated that more than one billion people around the world are confined, or isolated, due the Coronavirus pandemic. The (...)